Chile, Colombia and Peru are all better prepared to accommodate their aging populations than the United States, according to a new study from Mercer. Countries around the world are grappling with an aging population and how the problem will affect the economy, finance and society as a whole. As birth rates continue to decline and populations continue to age, how governments prepare for the future of their pension systems will reflect the health of their societies.

“Pension systems around the world, including social security systems and private sector arrangements, are now under greater pressure than ever before. The significant aging of the population in many countries is a reality. Yet that’s not the only pressure point on our retirement systems, ”said David Knox, senior partner at Mercer.

While the study, titled Melbourne Mercer Global Pension Index 2018, indicates that it is difficult to judge a country’s system due to different levels of socio-economic development and political stability, it is increasingly clear what good practices look like and where they come from. The top of the list is dominated by Northern European and Anglo-Saxon states, in addition to the UK and US.

It may surprise some Americans, but potentially not others, that the United States is not the best place to retreat to the western Atlantic Ocean. The United States may have the highest GDP per capita of any continent, but that wealth is not represented in its retirement system. Of the eight American nations in the index, the United States ranks fifth, ahead of Brazil, Mexico and Argentina.

The study which was conducted by the consultancy firm in human capital and global investment assesses pension systems according to three categories; adequacy, durability and integrity. Topping the list globally is the Netherlands, followed by Denmark. These two European countries are the only two in the upper bracket with a score above 80 on the index. 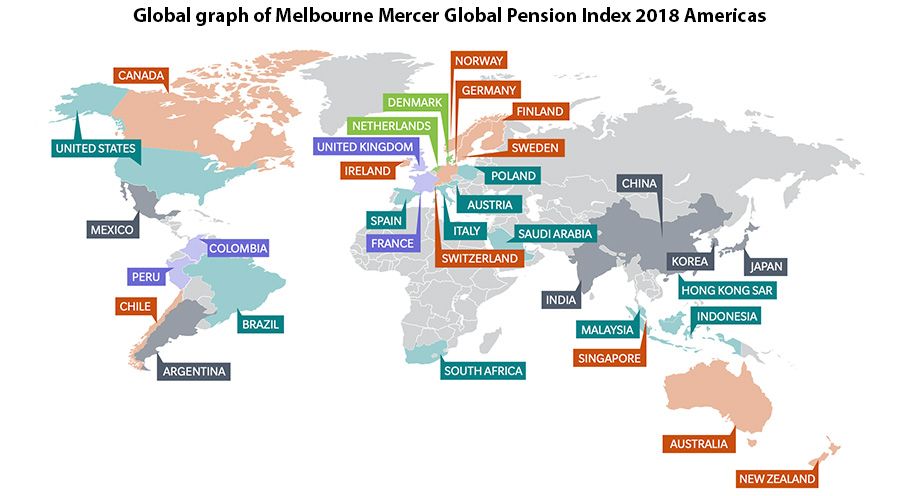 The Canadian system has been ranked in a similar position by researchers, and has a universal flat rate for retirees that is supported by means-tested income supplement and individual income savings plans. Canada got a fixed score of 68 on the index, followed by Switzerland, Ireland and Germany.

Colombia leads the fourth tranche (60-65 index points). Colombia has recently become a regional economic force to be reckoned with, having been invited to join the OECD earlier this year. Colombia’s shortcomings, however, lie in its contributions to the poorest elderly and in the sustainability of the system, with a recommendation to increase the state pension age over time.

The British system sits directly between Colombia and Peru, which are then followed by France. The Peruvian system faces many of the same problems as Colombia’s due to the unequal distribution of wealth, a demographics the two countries share. The country could accelerate improvements by increasing integrity in the forms of regulation and governance of the system as a whole.

The United States lags Saudi Arabia at the start of the fifth tranche – which also includes Brazil – leaving it below the global average score. The report states that countries in this category have “a system that has good features, but also has major risks and / or shortcomings that need to be addressed. Without these improvements, its effectiveness and / or long-term durability may be called into question.

Mexico and Argentina sit at the bottom of the index along with India and China, as their systems have major weaknesses that need to be addressed. The authors of the report said that “without improvements, efficiency and durability are in doubt”. The two Latin powers must increase the minimum pension available to the poorest elderly – like Colombia and Peru, as well as make many other corrections to the integrity and adequacy sub-indices.

“Latin America has a long way to go. It is fundamental to understand that the political instability of several countries, as well as the social and economic crisis in the region, have caused more obstacles to orientation and consolidation of pension systems. They postpone discussions to the highest technical level, which are necessary to improve the future of the region and force most countries to have reforms or legislation to strengthen the three sub-indices that our study measurement, ”explained André Maxnuk, CEO of Mercer Mexico and company leader for Latin America.

“With participation from six countries out of a list of 34, we observed that the assessment of Latin Americans indicates an urgent need to review current structures. It is important to assess that each structure is assessed on the basis of parameters. common good practice or management, but it is respected that there is no single and common system as a solution for all “, concluded Maxnuk.

2018-10-25
Next Post: Costa Rica among the Latin countries where inflation has fallen the most during the pandemic