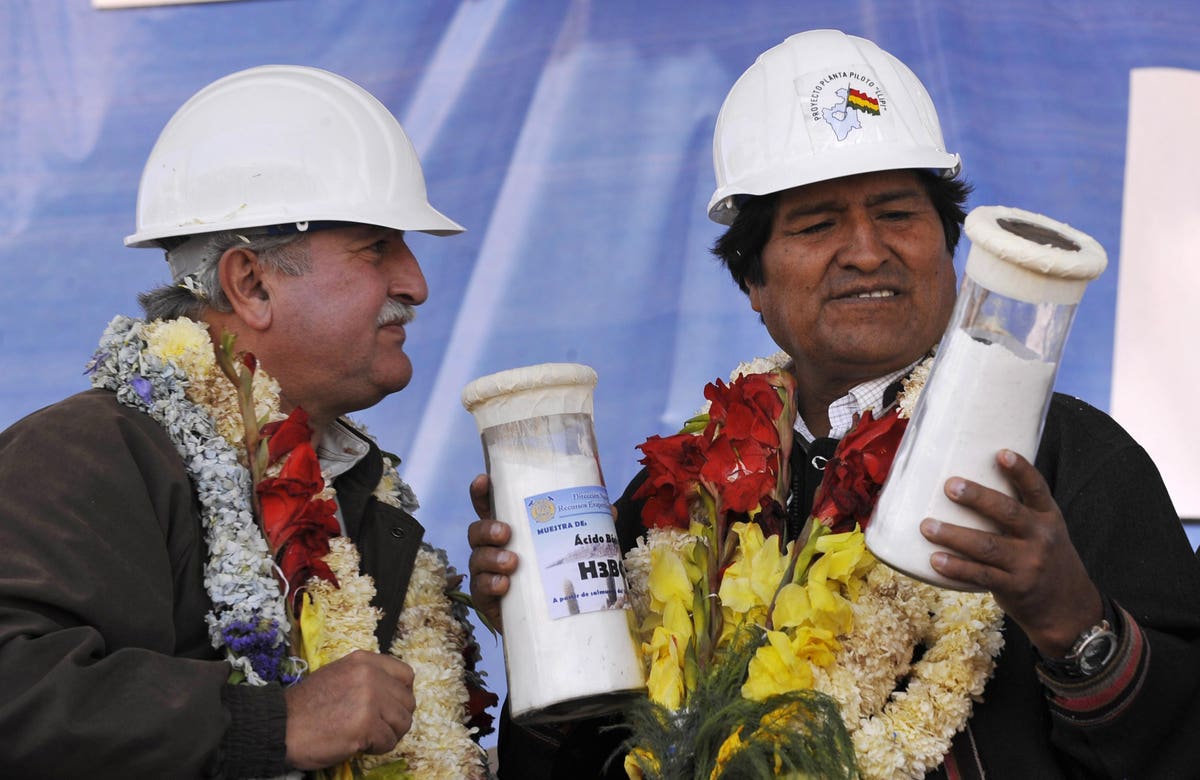 As the war in Europe highlights the problems of over-reliance on potentially hostile countries for critical energy supplies, the United States is looking for its own options to source the lithium it needs to electric vehicle batteries.

Chip shortages were a factor in last year’s supply chain crisis in auto manufacturing. Lithium shortages could mean EV batteries are next.

Yet, as advances in battery technology are slow, the shortage challenges President Biden’s ambitious plans to shift to non-fossil fuel-based transportation, with more than nine million new electric vehicles in the United States. United by 2030.

Currently, more than 80% of the raw materials needed for electric vehicle batteries come from China, which also controls nearly all of the world’s processing facilities for major critical minerals, including lithium.

But the lion’s share of that lithium is mined elsewhere, and much of the world’s resources are actually concentrated much closer to home – in Latin America.

Bolivia, Chile, Argentina, Peru and Mexico together account for about two-thirds of the world’s lithium reserves, with most of it concentrated in Chile, Argentina and Bolivia.

From a shipping perspective, not having to cross the ocean gives all these countries a leg up on Asia for lithium supply, according to supply chain logistics professor Marco Poisler. at the University of Houston.

An even more important advantage is that it does not leave the United States in the situation that Germany finds itself in – being dependent on a potentially hostile country.

“It’s much more risky to try to get lithium from China,” said Poisler, who is also chief operating officer for global energy at UTC Overseas, with experience in equipment logistics in China. lithium in Bolivia, Argentina and Chile. “If we look at the cultural ties that South America and Mexico have with the United States, it’s much easier to engage with them, even a country like Bolivia.”

At the same time, the lithium economy could also be a great boon for the region.

Lithium prices have risen from $10 per kilogram in January 2021 to over $50. The price increases came at a time when most of those same Latin American countries have been hit hard by the turbulent global economy and the impact of the pandemic. Chile, for example, experienced a 6% contraction in its economy in 2020. Argentina did worse: a miserable 10% contraction, following a previous recession.

Yet the region as a whole is currently experiencing a resurgence of resource nationalism when it comes to mining, particularly for lithium.

And he plays a big role in domestic politics.

Former Bolivian President Evo Morales tried to broker international lithium deals last year but was deposed in a coup, even as protesters demanded greater local ownership of the rights lithium mining and more royalties. Morales has since accused the United States of organizing the coup, motivated by their desire to obtain the Bolivian lithium. The new president, Luis Arce, campaigned on a platform of developing lithium resources for the public good.

Argentina currently produces 10% of the world’s lithium, but that could increase significantly, depending on how much risk companies are willing to bear. There is a powerful environmental activist movement that opposes the expansion, concerned about the environmental and social impact on the Puna region where the brines are located.

Mexico is perhaps one of the least attractive countries for lithium supply, both due to technical challenges and the current political environment. Its geology makes lithium itself much more difficult to access than the brines of Chile and Argentina. Mexican President Lopez Obrador specifically singled out lithium for a proposed ban on private mining in a major constitutional change currently under consideration.

In short, the mix of growing resource-based nationalism and inadequate infrastructure in many of these countries may make it more difficult than previously thought to move quickly on these projects.

The potential opportunity is being unearthed by small companies like EnergyX, a Texas energy start-up, which is exploring the possibility of importing lithium from Bolivia.

They better be patient, according to estimates from the University of Texas Office of Economic Geography, which offers an optimal scenario of at least four years to bring South American lithium to market.

Even that time estimate assumes the lithium would be in brine, which is much easier to reach than rock-locked lithium in Mexico, said Michelle Michot Foss, who led the research at the Bureau of Economic Research and is now a fellow at Rice University’s Baker Institute for Public Policy.

“Not all lithiums are the same,” Foss said. “There are big implications if the chemistry is carbonate versus hydroxide, for example – you have to invest a lot to get one or the other, depending on market demand.”

And the United States is not the only customer courting South American lithium, or even the most aggressive. China already controls significant lithium assets in South America, and its companies have made about $4.5 billion in lithium investment over the past three years in South America and Mexico. These investments are backed by the Chinese government, as its banks provide low-interest loans to Chinese mining and construction companies operating overseas.

The US government has certain tools, such as the US Export-Import Bank, that could be used to help provide some of the necessary financing for transactions that might otherwise occur.

But companies hoping to circumvent strict environmental regulations and standards by outsourcing from Latin America will undoubtedly be pushed back south of the border, as local populations and governments reassess their relationship with international mining.

“Countries in the less-developed world are rightly demanding a unified approach to responsible mining,” said Margaret Kidd, director of the Supply Chain and Logistics Technology program at the University of Houston. “Geography doesn’t change that.”

Some have floated the idea of ​​an OPEC-like organization in Latin America that would guarantee fair and stable prices to lithium producers and an economical and regular supply to consumers.

It’s an idea that has potential, if it offered a fair return on the capital that needs to be invested in the industry and a level playing field in terms of regulation.

Many of these countries, however, have performed poorly in the past, using strong nationalist approaches to energy, such as Mexico’s attempt to pressure private renewable energy companies out of the country.

Too much of a push could force the EV world to focus more on not needing lithium at all. Lithium isn’t the only material an EV battery can be built from, but it’s currently the cheapest, and it’s expected to be that way for some time to come. (Battery technology also requires other limited-supply minerals.)

A lithium future in Latin America will have to be mutually beneficial, for it to work. Otherwise, the money will just find other friends to play with.

Emily Pickrell is a veteran energy journalist, with over 12 years of experience covering everything from oil fields to industrial water policy to Mexico’s latest climate change laws. Emily has reported on energy issues in the US, Mexico and the UK. Prior to journalism, Emily worked as a policy analyst for the US Government Accountability Office and as an auditor for the international aid organization CARE.

UH Energy is the University of Houston’s center for energy technology education, research, and incubation, working to shape the energy future and forge new business approaches in the energy sector.