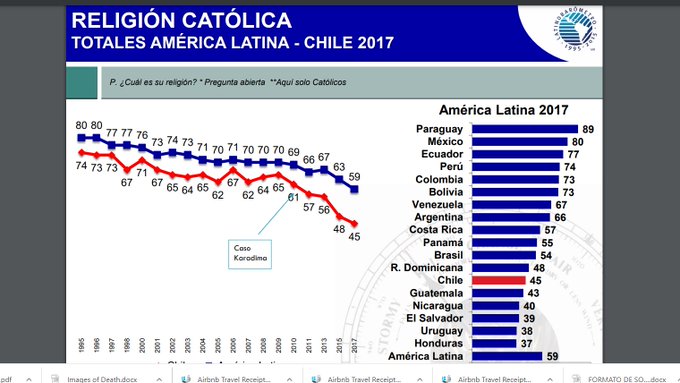 There is compelling evidence of continued Catholic decline in Latin America, home to 39% of the world’s Catholics, during the pontificate of Pope Francis, the region’s first pontiff. The religious landscape in Latin America is shifting from Catholic hegemony to pluralism, said Dr. Andrew Chestnut, professor of religious studies at Virginia Commonwealth University.

Latin Americans today have a wide array of options to choose from in the relatively free market of faith, leading to a significant trend toward pluralization, he said. Furthermore, he pointed out that this region of the world is by far the most Christian – 89% of Latin Americans are, the majority are Catholic and Evangelical, and no other part of the planet comes close to such a high percentage. . .

During his conference at the National Autonomous University of Mexico (UNAM) “Is Latin America still Catholic? The pluralization of the region’s religious landscape,” said the expert that Latin Americans abandoned Catholicism decades ago. “One of the main reasons a Latin American was elected pope nine years ago is the long-term decline of the flock in the most Catholic region of the world.”

At UNAM’s Center for Research on Latin America and the Caribbean (CIALC), he pointed out that Pentecostalism – a branch of charismatic Protestantism – already represents 70% of all Latin American evangelicals and has multiplied in eight countries are already no longer in the majority. Catholic, and one, Honduras, became the first nation in which Protestants, at 39% of the population, outnumber Catholics, at 37%.

In 1970, recalls Chesnut, 92% of Latin Americans were Catholic, although most did not go to church. Yet after half a century of precipitous decline, “the region that is home to 39% of the world’s 1.3 billion faithful will most likely no longer be predominantly Catholic by 2030.” A 2018 survey by the Latinobarometro organization found that the region is only 59% Catholic. “The idea that fervor for the New World’s first pope, a Jesuit, would result in temples full of worshipers who had not attended Mass for a long time has been dispelled.” Chile, for example, was 56% Catholic in 2013, and in just four years it has fallen to 45%.

Honduras leads the region in Catholic decline, falling from 76% to 37% in 22 years. “This nation, plagued by violence, is the first where Protestants outnumber Catholics,” he exclaimed. Uruguay, meanwhile, is the most secularized country – “It was the first in the Americas with gay marriage and legalized marijuana and it is now only 38% Catholic”. El Salvador is 40% Catholic; Nicaragua 40 and Guatemala 43%.

In contrast, Paraguay stands out as the most Catholic country in the Americas with 89% of its citizens belonging to the Church; Argentina is at 65%, but with a drop of 22 points since 1995, when it had 87%. Mexico, meanwhile, stands out in the survey as the only country with Catholic growth. In 1995, 70% of those polled declared themselves Catholic, and 22 years later the percentage had risen to 80%, making it the second most Catholic nation after Paraguay; although, he said, the 2020 Mexican census reveals a Catholic population of 77%: “it seems that there has been a decrease in recent years”.

Professor Chestnut explained that a good portion of Latin Americans who have left Catholicism in recent decades have converted to Pentecostalism. “The Protestant population has increased almost fivefold from 1970 to 2017 and 70% are Pentecostals (with denominations such as the Assembly of God and the Universal Church of the Kingdom of God, known in Mexico as ‘Stop Suffering’, etc.)”. In the countries studied, the majority of those who left Catholicism did so before the age of 25.

New surveys show that Latin American Protestants tend to be more religious than Catholics. Evangelicals, for example, go to church and pray more often. They are also more likely to read the Bible outside of worship services. As a region, the Americas have the greatest freedom of worship, even compared to Europe, although the least free countries are Cuba and Mexico; in the latter because the Catholic Church still has a lot of political influence, Chesnut explained.

Finally, he established that another salient trend in the Latin American religious landscape is the growing number of people, especially millennials, who choose not to have any religious affiliation. “They are not atheists or agnostics, but mostly young people who believe in the supernatural, but who do not belong to any particular institutional tradition.”