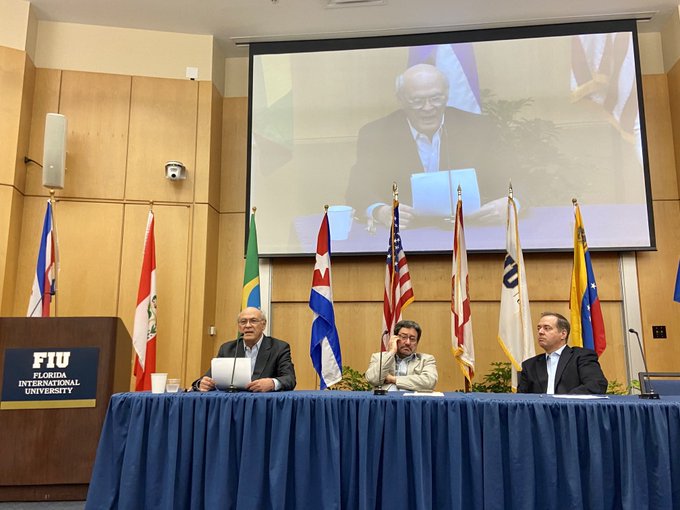 HAVANA TIMES – Exercising freedom of the press and freedom of expression has become increasingly difficult in Latin America. Authoritarian regimes and organized crime attempt to silence independent media in order to keep citizens misinformed. That was the warning of notable journalists at a forum titled “Press Freedom in the Americas,” sponsored by the Inter-American Institute for Democracy, part of Florida International University.

“Free press issues are pressing across the Americas. The panorama in front of us is desolate,” described Ricardo Trotti, director of the Inter-American Press Society.

The group has watched with concern the ongoing killings, imprisonments and restrictions on the basic rights of journalists in countries such as Mexico, Nicaragua, Venezuela and Cuba. However, they also warned of the negative repercussions of government rhetoric against independent media in a number of these countries and others in the region.

“We are not talking about easy times for journalists; we are in one of [profession’s] most challenging and challenging times,” noted Pedro Vaca, Special Rapporteur for Freedom of Expression at the Inter-American Commission on Human Rights. However, in part because of this negative atmosphere, “the community of journalists in the Americas is resilient,” he pointed out.

According to Vaca, there is “a regressive context for freedoms on the continent”. This manifests as “censorship by stigma and censorship by repressive regimes”. Closely linked to all this is the fact that “democracy cannot survive without information, without journalism”, he added.

In the case of Nicaragua, Confidential director Carlos Fernando Chamorro indicated that there is currently a “double criminalization” of the exercise of journalism: the Ortega regime persecutes and imprisons both reporters who inform, as well as their sources of information. Nonetheless, amid the country’s socio-political crisis, the independent press remains committed to the truth, stubbornly refusing to accept censorship or self-censorship.

“We [journalists] continue to inform, although today we have no more sources to cite in Nicaragua, because informing and giving opinions under a totalitarian regime is a crime paid for by imprisonment,” explained Chamorro. “Convicted people in prisons are there for expressing opinions, for posting opinions on social media and for making statements to national and international media,” he added.

Faced with this hostile scenario in Nicaragua, journalists today practice “collaborative reporting”. Their biggest challenge continues to be “carrying out high-quality investigative journalism in a climate of threats and political polarization,” Chamorro said. “The only thing that defends us from the totalitarian state and government slander is our public’s recognition of our credibility.”

Chamorro urged the international press to keep the Nicaraguan crisis on the agenda of public opinion in Latin America, as he believes: “It is a long-term crisis and a complex process of civic resistance”, to find a way out of the dictatorship. The challenge for Nicaraguan journalists and the international press is “not to accept the normalization of the dictatorship and to continue to inform”, concluded Chamorro.

Meanwhile, Mexican journalist Martha Ramos, president of the Mexican Media Alliance, said that in her country “the climate of decay is evident”. She noted as a “decisive element” the fact that “state powers attack journalists”.

In just four months of 2022, eight journalists have been murdered in Mexico. According to Ramos, “the mocking tone” that President Andres Manuel Lopez Obrador used against the independent press during his daily press briefings gives the impression that “journalists are an enemy to be beaten. It puts us in a very vulnerable position,” she said.

US-based journalist Jorge Ramos university network, also denounced the attitude of President Lopez Obrador. It has created “an environment hostile to independent journalism. The danger of all this can be seen in the current situation, in which [Mexico has become] one of the most dangerous countries in the world for the practice of journalism.

Robert Rock is vice-president of the Mexican Media Alliance and former board member of the International Press Society. He believes that across the region, governments “have increasingly sophisticated mechanisms in their hands” to weaken press freedom. “It is no longer governments imprisoning journalists, burning newspapers, it is something more sophisticated,” he said.

There is a very pronounced tendency among Latin American governments to hold “polarizing confrontational discourses, not only against the media but against any personality who could act as a counterweight”, warned Rock. This rhetoric “has more subtle, but equally damaging implications,” he said.